During the months of January and February, we will be open Thursday thru Monday from 12-5pm (closed on Tues & Wed). View our Covid-19 safety guidelines > 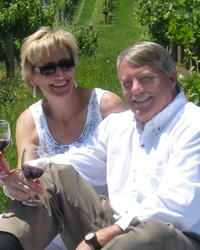 Doug Flemer, Ingleside Vineyards Proprietor: As a young man, Doug left home to study horticulture at North Carolina State University so he could prepare himself to help with the family business of Ingleside Nursery.

As a graduation gift for hard work, Doug’s parents gave him a trip to Europe. While traveling through the renowned regions of Bordeaux and Burgundy he was able to experience first-hand century-old vineyards and wineries. His zest for winemaking and viticulture was ignited. Also traveling through Europe at the same time was distinguished east coast viticulturalist Lucie Morton, who opened doors for Doug at the most esteemed vineyards and wineries in France. With Lucie’s help, Doug immersed himself in the grape growing and winemaking processes as he developed a refined palate.

In 1980, after his extensive trip touring France’s most prominent vineyards, Doug came home to help his father expand the initial vineyards which were planted in 1978, as well as assist in laying out plans for the winery.

1980 was a year of fruitfulness and celebration. This year marked Ingleside’s first commercial harvest. The winery produced 1,500 cases of wine. Shortly thereafter, Doug was handed the reins for Ingleside Winery and in the following year’s production expanded. Doug’s tireless efforts to experiment with what grapes grow best in Virginia and make exceptional wine has paid off.

Today, Doug resides with his wife Nancy and two children at Roxbury, one of the historic homes located on the property.

Nancy Flemer, Ingleside Vineyards Gift Shop Manager: Nancy is the wife of Doug Flemer. She grew up in the Pacific Northwest and after graduating from the University of Washington she moved to the east coast to work for Pan American Airways. Her international travel experiences helped her to develop a well refined palate. She ventured to a winemaker’s dinner in Williamsburg Virginia, where she first met her future husband. Sparks flew and the rest is history.

Today, Nancy manages the winery gift shop. Her exceptional culinary skills and eclectic taste in merchandise is evident throughout the shop.